When I came home after my craniotomy (my first operation in which neurosurgeon removed as much of the tumor as she could”), my goal in rehab was to win her inaugural “Patient of the Month” award.  While she didn’t have such and award and I’m not sure she was even thinking of creating such an award, I was telling my sister (who had come to stay with me during my first several weeks at home from the hospital) that our goal was to be so healthy at the six week mark, our first big review with my neurosurgeon, that she would have to create the award and give it to our family as a total effort – sort of like the Oscar for the “Best Picture” when everybody comes up on stage because it was a team effort.
In terms of physical activity, my doctor had laid down the law: she wanted me to be walking one and a half miles a day by our appointment at the six week mark, December 2nd.
Ha! Finally, here was something I could do to help!  I jumped on it like a “hobo on a ham sandwich.”
I started measuring the walking distance to local landmarks: the library, the Starbucks and the local grocery stores.  Each day my sister, Louis (our eager part German shepherd, part Labrador dog) and I would talk at least two walks (and sometimes three).
Since I wanted to prove that I was delivering on my promise, on a daily basis I kept a log of a) where we walked to, and b) how far we went.  I kept stats on our daily mileage and how that affected our overall cumulative average. And, hooray, I exceeded the doctor-prescribed goal of 1 ½ miles a day in the first day (see chart below).
Yes, I was anal about it.
When I got to a day when we logged over six miles, I called my neurosurgeon’s office and asked them if there was any benefit in going for seven, eight and nine miles a day? I could almost see this puzzled expression on her face saying “What?” The doctor’s assistant assured me that three miles a day was plenty, and that I should spend my time doing other things, like working on my “occupational” rehab activities.
This, of course, just reaffirmed my brother’s unspoken credo – “Anything worth doing is worth over-doing.” 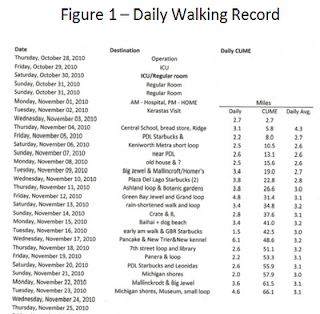 Thank you for visiting and commenting on a photo of my chil'ren yesterday!

I wish you healing and hope this holiday season!