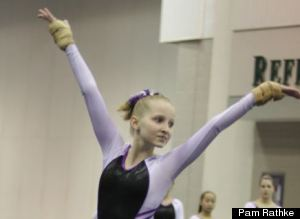 While the Olympics are fresh in our mind, I wanted to relate this story of an Illinois girl who dreamed about Olympic gold and was derailed by a brain tumor.
According to the article on the Huffington Post website, "Morgan Rathke of Illinois was tearing up the gym in 2005. At 13 years of age, she’d been training in gymnastics for more than a decade, along the way collecting ten national titles and dreams of Olympic gold.
But then came the dizzy spells, and the headaches, and the vomiting -- and, to her parents’ horror, the most dreaded diagnosis of all: medulloblastoma, the most common form of deadly brain tumor that a child can develop. Overnight, Morgan’s battle to compete at the Olympics games gave way to a more sobering assignment: the fight for her life."
Well, no kidding, we're talking medulloblastoma.
Strangely and wonderfully, the story has a happy ending. You can read about it at: http://www.huffingtonpost.com/2012/08/08/marlo-thomas-amazing-children-morgan-rathke_n_1756179.html
*This is the headline from the Huffington Post article which captures the essence of the story better than anything I could write.
Posted by John's Brain at 10:54 AM