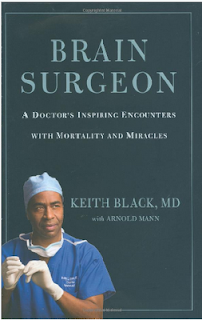 If you ever wondered what it’s like to be the surgeon, instead of the patient, this is the book for you.
While much of it is about his meteoric career, his description of specific cases brings a very human presence to the science of the diseases and his efforts to “cure” patients. I put cure in quotes because in many brain cancer instances its more about giving patients more months, than years, to live.
With that as a cheery background I also liked that he discussed a variety of tumors: from glioblastoma multiforme to a clival chordoma to astrocytoma, among others.
His comments on “benign” versus “cancer” also resonated with me. He talked about a specific case of a young woman with acoustic neuroma and noted that “Tumors like this one are a good example of why the terms ‘benign’ and malignant’ are not always useful.”  He wrote that “While the tumor was termed ‘benign’ because there was no risk that it would spread to other areas of the brain. Nevertheless, as it continued to grow and press on the brain stem, it would be every bit as deadly as the most aggressive glioblastoma multiforme.”
For you folks interested in ependymoma, he also discussed the case of a young Ethiopian boy who was brought to the US by the Save the Children charity. The boy had a huge posterior fossa tumor (an ependymoma) and, basically, no insurance. This led into a frank discussion of hospital finances and ethics.
Does he have a bit of an ego? Yes. Personally, I think that’s a good thing in surgeons as I want them to be 100% confident when they start snipping tumors from my brain. I also think he rather deserves to have a bit of an ego, especially given his research accomplishments.  I’ll let you decide if his ego/achievements gets in the way of his story.
Here’s a link to the Amazon posting and reviews: http://www.amazon.com/Brain-Surgeon-Inspiring-Encounters-Mortality/dp/0446198145/ref=la_B001O4694W_1_1?ie=UTF8&qid=1347026895&sr=1-1

There is a chance you're eligible to receive a $1,000 Amazon Gift Card.