I found this article by Kathleen Foody in Friday’s Chicago Tribune disturbing on a number of levels - http://www.chicagotribune.com/news/nationworld/ct-jimmy-carter-brain-cancer-20150820-story.html
The disturbing part is easy, ex-US President Jimmy Carter reported in a news conference late last week that “…doctors had removed melanoma from his liver, but found four small tumors in his brain. Later Thursday, he received radiation treatment. He also began receiving injections of a newly approved drug to help his immune system seek out and destroy the cancer cells wherever else they may appear.” 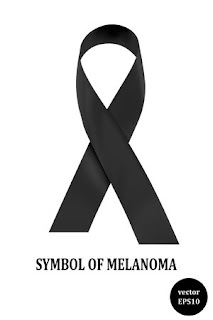 Bleakly, the cancer color for melanoma is black which, to my way of thinking, tells you all you need to know.

In fact, everything I know about melanoma, the most serious type of skin cancer, is bad. I know that melanoma has killed a cousin of mine, and that it has tried to kill both me and another cousin. We’re the lucky ones because unless it’s caught early, melanoma can all too easily become a quick one-way trip to the grave.

An article I read on Medscape.com reported that, “The incidence of melanoma is on the rise and although melanoma currently accounts for only 4% of all skin cancers, it is responsible for 80% of all skin cancer deaths. Worldwide, the incidence of melanoma is roughly 200,000, leading to approximately 46,000 deaths. Compared with primary lung, breast, renal or colorectal cancer, melanoma has the highest propensity to metastasize to the brain: over one-third of patients with metastatic melanoma will eventually develop a clinically apparent brain metastasis.” Here’s a link to the article: http://www.medscape.com/viewarticle/813109

According to the article, “His treatment regimen will include four injections of pembrolizumab, which was approved by the FDA for melanoma patients last year, at three-week intervals.”

If you, like me, couldn’t spell "pembrolizumab," let alone know what it is or does, here’s a link to a very recent article from The New England Journal of Medicine  which seems to indicate that the drug pembrolizumab is the current best weapon we have for fighting melanoma, wherever it is in the body: http://www.nejm.org/doi/full/10.1056/NEJMoa1503093
John

PS - I added the italic to the Medscape quote to emphasize the deadliness of the disease.
Posted by John's Brain at 3:49 PM

I am so happy, i never believe i will be this happy again in life, I was working as an air-hoster ( cabby crew ) for 3years but early this year, i loose my job because of this deadly disease called Herpes virus (HSV), I never felt sick or have any symptom, till all workers were ask to bring their doctors report, that was how i got tested and i found out that am HSV positive that make me loose my job, because it was consider as an STD and is incurable disease, i was so depress was thinking of committing suicide, till i explain to a friend of mine, who always said to me a problem share is a problem solved, that was how she directed me to Dr Isibor, that was how i contacted him and get the medication from this doctor and i got cured for real, I just went back to my work and they also carry out the test to be real sure and i was negative. Please contact this doctor if you are herpes positive or any STD diseases his email is: drisiborspellhome@gmail.com or you can call or whatsApp his mobile number on +2348107855231.

I was diagnosed of HERPES in 2015, i have tried everything possible in life from one doctor to another, one hospital to another, series of tests different kinds of medication i had already lost hope until i meet Great DR OBUDU online testimonies, a specialist in herbal medication from Africa, i contacted him true his email OBUDU.MIRACLEHERBALHOME@GMAIL.COM and he prepared HERPES herbal medication for me which i took for 7days and now i am completely cured i want to use this medium to express my gratitude to him for saving my life and curing me from HERPES VIRUS for taking away all my pains and sorrows, I''m indeed grateful and i am so happy I''m now cured totally, I will continue to tell the good news of your great works to everyone, if you have HERPES or other disease contact him true his Email: OBUDU.MIRACLEHERBALHOME@GMAIL.COM Or whatsApp him via +2347035974895 thank you my great DR OBUDU for curing me keep up your great work