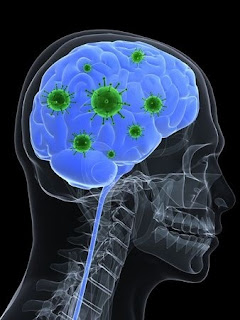 To read the rest of the article and the real live plot twists and turns, go to: http://www.newyorker.com/magazine/2015/12/07/bacteria-on-the-brain
Posted by John's Brain at 2:35 PM

i was in a trauma, having to deal with brain cancer and tumours, I kept on having seizures and i thought I would lose my sanity and my life, my brother got the contact of a powerful herbal doctor, whose herbal medicine cured my brain cancer, now i am cancer free! He is a genius in dealing with cancer and all brain related issues, you also can contact him on joseherbals28@gmail.com

My name is Donald boykins , and I am here to appreciate Dr Akhigbe for using his herbal medicine to cure my Herpes virus. Is about 3 years and 6 months now I have been living with this virus and it has been a serious problem to me, I was so confused cause i have been taking several drugs to be cured but all of my effort was in vain,one morning I was browsing through the internet then I saw several testimonies about Dr. Akhigbe curing people from Herpes virus and immediately i contacted Dr. Akhigbe on his email: drrealakhigbe@gmail.com, i told him about my troubles and he told me that i must be cured, he gave me some instructions and which i rightly followed. so he prepared a herbal medicine and sent it to me which i used for 2 weeks and i was cured everything was like a dream to me and my Herpes virus was totally gone, dr .Akhigbe, God bless you and give you more power and ability for more cure.I don't know if there is anyone out there suffering for herpes virus or any of these diseases..DIABETES, CANCER,  HIV/AIDS, HERPES HEPATITiS A AND B. FEVER, EPILEPSY, MENINGITIS, DENGUE SCHIZOPHRENIA, PROSTATE, THYROID, BACTERIA, MALARIA, DICK AND BREAST ENLARGEMENT,MULTIPLE SCLEROSIS, TUBERCULOSIS, DIARRHEA, POLIO, LOW BLOOD PRESSURE,  INSOMNIA,ARTHMA, LUPUS,  RABIES, JOINT PAIN, STOMACH PAIN, HYPEROPIA, HEART DISEASE, CHRONIC DISEASE,EPILEPSY, LUPUS, STROKE, SPINAL CORD INJURY, ECZEMA, KIDNEY DISEASE, ACME,  KAWASAKI, BACK PAIN etc. why don't you contact dr.Akhigbe today and be free from your diseases because he is very good and honest Doctor and he is also called the godfather of herbal root contact him via email; drrealakhigbe@gmail.com or whatsApp him on                     +234  901 075 4824
website https:drrealakhigbe.weebly.com