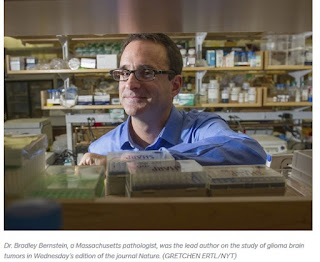 That’s the headline in the December 23rd 2015 edition of the Wall Street Journal which reports that “Researchers studying brain tumors said they have discovered a new biological mechanism that causes normal cells to become cancer cells, a finding that both challenges current treatment strategies and could lead to new approaches against the disease.” See http://www.wsj.com/articles/study-finds-mechanism-that-causes-normal-cells-to-become-cancerous-1450895338
According to an article by Ron Winslow, “In a study published online Wednesday in the journal Nature, the researchers reported that a mutation in what are called IDH genes causes changes in how DNA is folded into the nucleus of cells. This in turn enables abnormal interactions between other genes, turning on a process that promotes the development of tumors.”

A separate write-up of the study in The Seattle Times, by Gina Kolata of the NY Times, reports that “The study’s lead author, Dr. Bradley Bernstein, a member of the Broad Institute in Cambridge, Mass., and a pathology professor at Massachusetts General Hospital, said he has found a similar phenomenon in about a dozen other tumors.

He added that the discovery suggests a potential treatment with an existing chemotherapy drug that restores the walls separating the DNA sections.” Here’s a link to that article by Gina Kolata: http://www.seattletimes.com/nation-world/dna-study-unlocks-brain-tumor-treatment/

I have no idea how much or how quickly this moves us forward in finding a cure or cures, but I like this quote, “I am biased, obviously,” Bernstein said. But, he added: “I am really optimistic about the potential of this information.”