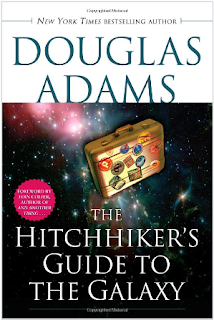 “Don't Panic” is a phrase written on the cover of The Hitchhiker's Guide to the Galaxy. The novel explains that this was partly because the device "looked insanely complicated" to operate, and partly to keep intergalactic travelers from panicking. The book also reports that "It is said that despite its many glaring (and occasionally fatal) inaccuracies, the Hitchhiker's Guide to the Galaxy itself has outsold the Encyclopedia Galactica because it is slightly cheaper, and because it has the words "DON'T PANIC" in large, friendly letters on the cover."

So what does any of this have to do with brain tumors? I was reminded of the phrase, “Don’t Panic”, when I read a blog posting on “the Brain Chancery” by Chad, a glioblastoma brain tumor victim, in which he writes:

“One thing I’d like to ask of you: please don’t go internet researching glioblastoma and how horrible it is.  All you’re going to find is depressing survival rates of 3 to 4 minutes.  This is because the VAST majority of people who get this are 70 year old men that already have diabetes and heart disease and shriveled testes and a nagging wife, so they’re bound to croak anyway.  And apparently it only affects 1 in 100,000 people, so when you discount all them old folks I’m a real rarity.

Which is a very very good thing– I am young, and healthy, with a very powerful immune system and an even stronger sense of hope.  I’m not Lanceypants Armstrong or anything, but I am very much in the absolute top percentile of people who should be able to beat something like this.  Every doctor I have talked to has said this exact thing– survival rates that you’ll find on the internet are absolutely meaningless & inapplicable to my situation.   I am going to do what I need to do, and work from the information my doctors give me.  And it’s going to work.  So don’t look up scary stories of old dudes dying from exploding nuclear brain tumors – it’s a pointless exercise in making yourself depressed for no reason (also I’ve been told this thing isn’t contagious, so we can still share a soda, which is great).”

In my mind I've filed all this under the title of "The Power of Positive Thinking."

If you want to read more, here’s a link to his blog: http://thebrainchancery.wordpress.com/category/what-the-hell-happened/

PS – I do wonder if Chad would throw me into the “old folks” category?
PPS – According to Wikipedia, the source of all knowledge in the universe, “Arthur C. Clarke said Douglas Adams' use of ‘don't panic’ was perhaps the best advice that could be given to humanity”.

Email ThisBlogThis!Share to TwitterShare to FacebookShare to Pinterest
Labels: BGM, Don’t Panic, Douglas Adams, the brain chancery, The Hitchhiker's Guide to the Galaxy