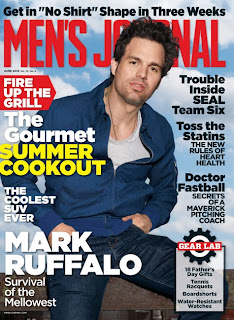 You may know him as the HULK, but I just learned something about him that’s a bit more important – he’s a brain tumor survivor. I got this from Men’s Journal magazine in an article written by Josh Eells (yes, is looks like a pseudonym, but it isn’t).

Here’s a telling paragraph from his article: “Ruffalo was diagnosed with an acoustic neuroma, a walnut-size tumor behind his left ear. He first suspected he had one after he had a dream about having a brain tumor, and when he went in for a CT scan, the doctors told him he was right. They said they could operate, but there was a 30 percent chance he might lose the use of the left side of his face. To complicate things even further, Sunrise was about to give birth to their first child, Keen, and Ruffalo didn't want to stress her out.”