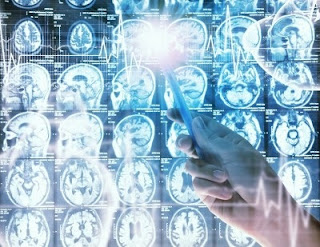 That headline, written by Renee Elder of The News & Observer (Raleigh, N.C.), seems like something we’ve read a zillion times only to be disappointed later. This might be different because, as Elder writes, “The same virus that causes paralysis and sometimes death in polio patients may have the potential to cure people with cancerous brain tumors based on early results of a research trial underway at Duke University Medical Center.”
I’m no researcher or medical professional*, but this sounds like (Gadzooks!) something new.

Here’s the nut of the story from Ms. Elder: “Stephanie Lipscomb, 22, learned that she was nearly cancer-free during a checkup at Duke Cancer Center on Monday -- 14 months after a modified version of the poliovirus was injected into her brain to treat a recurring, aggressive cancer known as glioblastoma.”

In fact earlier this year the National Brain Tumor Society, the largest nonprofit dedicated to the brain tumor community in the United States, announced “the formation of the Defeat GBM Research Collaborative. Defeat GBM is a strategic research initiative, which aims to double the five-year survival rate of patients with glioblastoma multiforme the most common and deadliest form of brain cancer – in just five years.”

For those of you who, like me, are mathematically challenged, that means stretching the survival rate to thirty months. Given the effectiveness of our current weapons in fighting GBM, that result would be a huge improvement for victims yet, at the same time, seems woefully inadequate.
So when I read this article about a “modified poliovirus” that is seemingly curing a young victim of GBM, I sat up and took notice. If you are similarly interested, here’s a link to the article: http://www.sunherald.com/2013/07/31/4839511/tests-show-womans-brain-tumor.html#storylink=cpy
*I did, though, feel like a professional patient after a series of brain tumor operations and procedures. If you have trouble sleeping, Chief Complaint, Brain Tumor  (http://www.chief-complaint.com/) – a book about my brain tumor journey - might be of some help.

There are a bunch of viruses being developed for cancer now. They're called "oncolytic viruses". Polio is a newcomer. Amgen's T-vec will almost certainly be approved for at least melanoma, despite misleading media coverage, although perhaps after another study is run. Oncolytics biotech has 7 randomized trials using Reovirus in combination with chemo, and Viralytics is using a virus that is hard to spell. There is also Jennerex using vaccinia. The field looks promising, and furthermore the viruses are likely to be synergistic with immunotherapies and perhaps with each other. They have much better side effect profiles than most standard treatments, certainly I'd rather have any of those viruses than chemo or radiation.

BlueHost is definitely one of the best hosting provider with plans for all of your hosting needs.