Fruits and Vegetables: Seven-A-Day for Happiness and Mental Health 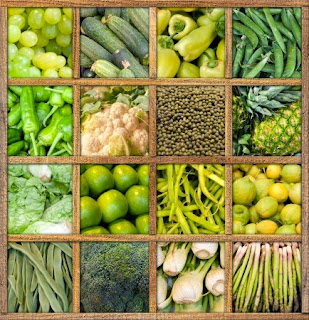 But a 2012 study from the University of Warwick reports that, “Happiness and mental health are highest among people who eat seven portions of fruit and vegetables a day.”

My initial thought was, “Ok, they talked to a dozen (12) people in a couple of focus groups and extrapolated…or maybe even exploited the findings.”

According to an article in ScienceDaily.com, “Economists and public health researchers from the University of Warwick studied the eating habits of 80,000 people in Britain. They found mental wellbeing appeared to rise with the number of daily portions of fruit and vegetables people consumed. Wellbeing peaked at seven portions a day.”

I felt somewhat vindicated and better about the research findings when the researchers admitted that “In Britain today, a quarter of the population eat just one portion or no portions of fruit and vegetables per day. Only a tenth of the British population currently consume the magic number of seven or more daily portions.”

Somehow a tenth seems high for us Americans.

I felt I needed to write about this because almost every brain tumor victim or caregiver or friend or relative I know or have met really needs better mental health or to be happier, usually both.

Will I be eating seven (7) helpings? I doubt it.

And here’s a link to the original press release issued by the University of Warwick: http://www2.warwick.ac.uk/newsandevents/pressreleases/7-a-day_for_happiness/