Here’s another unfortunate person to add to the list of Celebrity Brain Tumor victims. 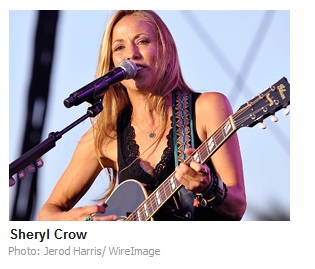 Strangely, though, Ms. Crow doesn’t sound like she’s all that worried or maybe knowledgeable about meningioma. According to her quotes in MTV News she said “I worried about my memory so much that I went and got an MRI. And I found out I have a brain tumor," Crow told Doug Elfman of Las Vegas Review-Journal on Friday at the Mandalay Bay hotel. "And I was, like, 'See? I knew there was something wrong.' I haven't really talked about it," she added. "In November, I found out I have a brain tumor. But it's benign, so I don't have to worry about it. But it gives me a fit." Here’s a link to that article: http://www.mtv.com/news/articles/1686628/sheryl-crow-brain-tumor.jhtml
Her quote gives me fits.
I want to send her the “It’s Just Benign” website link so she could read it and realize that meningioma can be a dangerously debilitating tumor. I worry that’s she’s getting some awful advice, or that maybe she’s just in denial.
In either case, she’s doing an incredible disservice to those of us who have meningiomas, who have suffered, who are handicapped and hurting.
The quote of the “singer’s rep” in the same article was even worse saying “"Half of us are walking around with [meningioma] but you don't really know unless you happen to have an MRI”.
I invite you all to leave Ms. Crow (I don’t know her well enough to call her Sheryl) a message on her Facebook page: http://www.facebook.com/sherylcrow.  I have.
If you’re a celebrity (Liz Holzemer?), maybe she’ll take your call and convince her to have her folks better represent the seriousness of her disease.
Posted by John's Brain at 3:58 PM