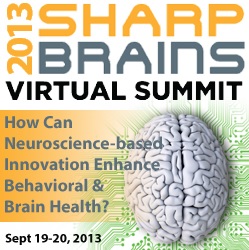 I just got early notice of the 2013 SharpBrains Virtual Summit, set for September 19-20th, 2013. According to the email, the event “will feature nearly 40 of the world's top scientists, innovators and decision-makers addressing the central theme of "How Can Neuroscience-based Innovation Enhance Behavioral and Brain Health?"

The speaker list includes:
Here’s a link to the registration site: http://sharpbrains.com/summit-2013/

Ohh, and according to their email you can get a 10% discount using with this promotional code: sharp2013