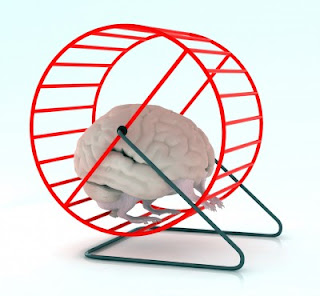 One of my favorite health and fitness writers, the effervescent Ms. Gretchen Reynolds, has recently written a new article about two new studies that delve into the link between exercise and improved cognition.

The article, entitled Getting a Brain Boost through Exercise -http://well.blogs.nytimes.com/2013/04/10/how-exercise-may-boost-the-brain/?ll_leid=224&refer=5821  - reports that “Two new experiments, one involving people and the other animals, suggest that regular exercise can substantially improve memory, although different types of exercise seem to affect the brain quite differently. The news may offer consolation for the growing numbers of us who are entering age groups most at risk for cognitive decline.”

Since I am part of an age group that’s “most at risk,” I pay special attention to articles like these.

Reynolds writes that “The new studies provide some additional and inspiring clarity on those issues, as well as, incidentally, on how you can get lab rats to weight trains who are entering age groups most at risk for cognitive decline.”

Anybody who has the wit to joke about “rats” and “weight” training in the same sentence gets kudos from me. (And please, no “gym rat” jokes.)

While I encourage you to read Reynolds’s article, I found this summary of both research studies both interesting and relevant, “What all of this new research suggests, says Teresa Liu-Ambrose, an associate professor in the Brain Research Center at the University of British Columbia who oversaw the experiments with older women, is that for the most robust brain health, it’s probably advisable to incorporate both aerobic and resistance training. It seems that each type of exercise “selectively targets different aspects of cognition,” she says, probably by sparking the release of different proteins in the body and brain.”

Here’s a link to the original research on humans published in the Journal of Aging Research: http://www.ncbi.nlm.nih.gov/pubmed/23509628