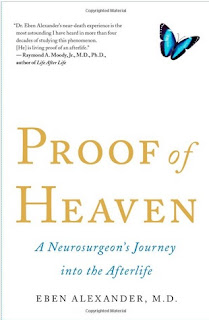 As much as we try to block, sidestep or parry death’s tentacles from penetrating our daily thoughts, in this business death isn’t far from anybody’s thoughts.  It’s with that cheery thought that I recently read Proof of Heaven: A Neurosurgeon’s Journey into the Afterlife by Eben Alexander, M.D.

This is a near-death-experience (NDE) book. Actually, near-death-experience is probably a misnomer. For all intents and purposes, Dr. Alexander was certainly brain dead (literally) and his family was just dancing around the idea of pulling the plug when –Eureka! – he makes a miraculous recovery.

Actually his recovery is so surprising, given the myriad of medical folks who thought him beyond any sort of recovery, I’ve begun to think of it as Miraculous Recovery² (or MR2 for short).

Dr. Alexander was an academic neurosurgeon for 25 years, including 15 years at the Brigham & Women’s and the Children’s Hopitals and Harvard Medical School in Boston, so his perspective on a NDE or even a MR2 is a bit more notable than the common, found-around-the-house NDE.

He recovers with an incredible and uplifting story of the afterlife. Whether you believe it or not is up to you, but I found the book articulate, provocative and full of scientific details (most of which I didn’t understand).

There is a chance you are eligible to get a free $1,000 Amazon Gift Card.