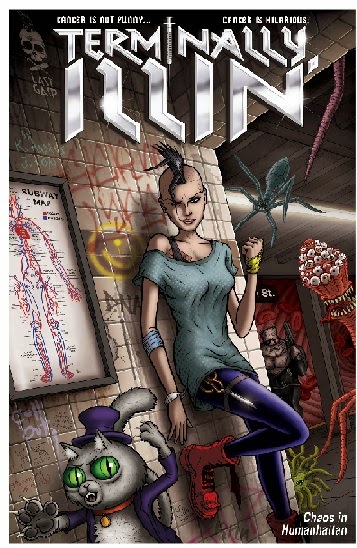 Kalin Andres is one of my favorite “Badass Brain Tumor Bloggers” and she, and her collaborators, have just released “TERMINALLY ILLIN' BOOK 1: CHAOS IN HUMANHATTAN!” the comic book.

If you don’t know about Kalin or her partners, I’m sure you’re thinking something like, “Ok, that sounds weird, what’s that about and why am I writing about it.

To answer the first part, this is how it’s described on their indiegogo.com website: https://www.indiegogo.com/projects/terminally-illin-cancer-comic-book--2

“Kaylin was diagnosed with Ewing's Sarcoma, a rare bone cancer at age 23. Her life was immediately put on hold and a new journey began. Throughout all the pain and uncertainty, she discovered within herself a powerful coping mechanism in the form of humor and imagination. This comic book is the result.

Slightly cynical, slightly irreverent, and REALLY hilarious, "Terminally Illin" is a candid look into the life of a young adult battling cancer, but with a psychedelic, sci-fi twist! It’s more than a comic book: It’s provocative, educational, entertaining, and totally original.  Think of "Terminally Illin" as a chemo-induced "Alice in Wonderland' meets campy 'Hollywood' action-adventure.

In our story, our hero goes in for her first day of chemo, but ends up getting lost in a fantasy world within her own microscopic body - on a quest to meet her disease face-to-face and kick its butt!!

She's joined by her pet kitty, Iceman, as they set out to destroy Cancer City, the invading cancer cell army, and their leader - the little dictator that's bent on world domination. We hope you follow along and maybe even learn something.”

I love the book and want to argue with this description. I think it’s wonderfully cynical, absolutely irreverent and, yes I agree, really hilarious.

Now listen closely, here’s the part I love, “If we can raise one half of the print fees, the publisher will give us half of the print run. We'll have an extra 500+ books to give away free to cancer centers, hospitals, and patients. There are 72,000+ young adults diagnosed with cancer each year, and we'd like to help ease their experience by sharing Kaylin's experience, outlook, and humor.”