Practicing the trombone improves your ability to hear

Actually, that statement is a little misleading.  According to a new study from nearby Northwestern University in Evanston indicates that “Lifelong playing of musical instruments has a positive impact on the brain”. What impact?  It helps you better hear somebody speaking in a noisy place, like a restaurant or bar.
Now it is true that there is nothing in the article that attributes the improvement solely to trombone playing. At the same time, I feel that I need to point out that the Chicago Tribune article does show a picture of a trombone player.  And, in case you’re wondering, yes, I did play trombone in the Michigan State University Spartan Marching Band.
According to Nina Kraus, a neuroscientist at Northwestern University, and the principal investigator of its Auditory Neuroscience Laboratory, clarifies the results of the study saying, “Hearing what your spouse says when you’re in a noisy restaurant, for example, is harder when you’re older. But this study shows that musicians are faster at processing noise than non-musicians are. This shows us there is a biological impact of musical training.”
I find this both fun and interesting.  So I went to the Northwestern University’s Neuroscience Laboratory’s site and listened to Dr. Kraus talk about how the brain “hears” music. I loved hearing talking about the similarity between the sound wave and corresponding brain waves.
Here’s a link to a video of her talking about that:  http://www.soc.northwestern.edu/brainvolts/fys_kraus/kraus.html
But wait, there’s more!  According to Kraus, “We’ve been pleased to hear from educators who have used our website to argue for funding for continuation of musical education. We’re giving them biological evidence that, yes, continued musical education matters.” Here’s the link to the PPT slides recapping their research projects including the evidence to which she refers: http://www.soc.northwestern.edu/brainvolts/slideshows/music/index.php
And here’s a link to the article in the Chicago Tribune: http://articles.chicagotribune.com/2012-03-28/news/ct-x-music-training-study-20120328_1_musical-instruments-musical-training-musical-education
Posted by John's Brain at 11:42 AM No comments:

Now here’s something that, if it wasn’t quite so pricey, I’d sign up for – the 2012 SharpBrains Virtual Summit: http://www.sharpbrains.com/summit-2012/
Because it’s a virtual summit – i.e. held online – top rank speakers can participate without wrecking their schedule.  And this summit seems to have some topflight speakers including:
This is a who’s who of brain health and cognitive skills improvement.  The idea of sitting in front of your computer at home and listening to these guys (a term that I use in the non-gender, Midwestern form) is pretty attractive. I also find the nice mix of private company speakers and purely academic speakers intriguing – are the private company CEO’s going to transform themselves into salesmen?  Are they going to take a statesman-like stance?  Or are they going to argue for their own technique or research?  Who knows?  I suspect, though, that if you had the time, and $$$, I’d be fascinating.  If you attend, please let me know.
Posted by John's Brain at 7:00 AM No comments:

Who is the celebrity face of brain tumors and why do we need a “celebrity” brain tumor spokesperson?  That’s a pair of questions that Michael Finley asked in a nifty article entitled, “Celebrity Brain Tumors” in 1999.
He wrote the article after he submitted a piece to, I’m guessing, USA Today, which he entitled "How to tell your kids you have a brain tumor." The publication liked his submittal but rejected it saying “…I'm afraid we have to say no. There are so people with ailments of one sort or another, that we have made the editorial decision to focus on first-hand accounts of celebrities only."
He observed, quite correctly I believe, that “What a stupid world we live in… that requires the additional ‘juice’ of fame to pay attention to a story that is already about life and death.”
Here’s a conversation that was reported to him from his support group that, even if it isn’t completely accurate, has a lot of human insights: "What is it," asked one group member, "that keeps famous people from wanting to acknowledge their brain tumors? Is it a desire for privacy, or fear of scary publicity, or not feeling up to the demands of being a spokesperson?"
"I'll bet they're just scared shitless and feeling sick as hell," said another member. "They see their lives going down the toilet, they've been healthy as horses all their lives, and don't think they have what it takes to reach out and help other people."
The support group went on to list celebrities that have had brain tumors. Here’s some of their list:
Here’s a like to Mr. Finley’s article: http://mfinley.com/tumor/bt-celebrity.htm
Wikipedia also has their own list posted at: http://en.wikipedia.org/wiki/List_of_brain_tumor_patients
My sense is that this list is a bit dated, and would love to hear from those of you who can add to the list or nominate victims who should be the “face” of brain tumors to the rest of the world.
Posted by John's Brain at 7:00 AM 10 comments:

As many of you know, in the I was diagnosed with a Grade I meningioma brain tumor in the Fall of 2010.  My first operation was in October of that year.  Shortly after Thanksgiving we discovered that my wound (i.e. my skull) was infected. After several procedures, the infected skull was removed – much like Gabby Giffords.  After a lot of really strong antibiotics and significant rehab, I got a new and improved prosthetic skull (made out of the finest plastic and very similar to bowling ball material) glued into my skull.  In late Spring of 2011, I had a radiation blast and have been on the mend ever since.
Here’s the strange part: I’m one of the lucky ones. About one third of brain tumors are meningioma, which is considered “benign” (and if you think benign means “no harm”, you need to visit http://www.itsjustbenign.org/).  All other brain tumors are much more invasive, faster growing and destructive. All of us – scientists, doctors and patients - have a lot to learn about why people get brain tumors and how to help folks who get them.
So I’m raising money by running in the American Brain Tumor Association’s “Breakthrough for Brain Tumors” fund-raiser on the cinematic shore of Lake Michigan on Saturday, May 12th.  The route, starting in Montrose Harbor, will give you glorious views of Lake Michigan, a great lake shore park and out-of-shape joggers puffing and wheezing.
Since the fun run starts at 7:45 am, I can promise you gallons of coffee and all sorts of other fun-run goodies.
Please join my team – creatively named “Johns Tumor” - to raise $ to help find solutions to this nasty, scary, debilitating disease. If you can't run in the fun run, or even walk in the fun run, you can just send money.  In fact, the website won't know the difference.
Here’s link to the registration site: http://hope.abta.org/site/TR/ABTAEvent/PathtoProgress?sid=1540&type=fr_informational&pg=informational&fr_id=2270
Still not convinced?  Look at how happy I was after finishing last year's run...or it might have been the sugar high from the post-run sweets. 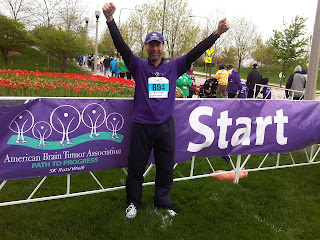 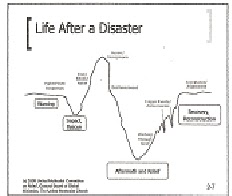 [1] United Methodist Committee on Relief
Posted by John's Brain at 3:02 PM No comments: