Fun and games at “Marbles: The Brain Store.”

One of my new favorite stores is “Marbles: The Brain Store”.  No this is not a blog that repeats my “Igor, I need a new brain” posting - http://johnstumor.blogspot.com/2012/01/igor-i-need-new-brain.html
Marbles is a “brick and mortar” store where you can walk in and, shock, actually try out something before you buy it.  Unlike last holiday season’s experience where folks window-shopped at a Best Buy and then bought via Amazon, many of these brain games are unique to “Marbles”.
I like (and own and use) “ColorKu” which is a bunch of brightly colored (wooden) marbles that you can use to play Sudoku. There is a tactile friendliness to the marbles which I find both helpful and personal. It’s like the difference between playing chess online and playing chess with real game pieces.
The mind-body connection with the marbles also seems important.  One of my early rehab exercises was playing solitaire.  My therapist told me, however, not to play online and, instead, to use real cards for some sort of “mind-body” connection that I still don’t really understand. I also remember wrestling with three dimensional puzzle pieces that we used to build geometric shapes to boost my spatial relations abilities…and I may get sucked into buying something like that at the store, too.
That “tactile” thought is echoed by chief merchant and co-founder Scott Brown who said, in a recent Chicago Tribune article, that "There's more of a shift back to the small mom and pop shop where people again want that personal touch. We do not just want to be a toy store, but a brain health store, and it's a white-glove experience in that we are trying our very hardest to match each customer with products for them and their brain."
This makes sense to me.  I bought my elderly mother a trial subscription to Lumosity over a year ago and she still hasn’t tried to use the link. I suspect, though, if I could lure her to a store in a nearby mall where she could try something out, she might actually buy and use something.
Haven’t seen a marbles store near you? As it turns out, Marbles is a Chicagoland-based company and the CEO, Lindsay Gaskins, is in a growth mode. According to the article, given “…swift sales at Marbles locations in Water Tower Place and Woodfield Mall, she is targeting 100 major malls in America.”
In case you're wondering, they have an online presence, too: http://www.marblesthebrainstore.com/?gclid=COvvxtOm-K0CFYe8KgodIkWXrA
And here’s a link to the Chicago tribune article: http://articles.chicagotribune.com/2012-01-23/business/ct-biz-0123-executive-profile-gaskins-20120123_1_brain-store-lulu-locations
Posted by John's Brain at 12:41 PM 1 comment:

If you’re a brain tumor victim or a cancer victim, let me tell you something you already know – life is tougher and rehab is a pain.
That’s a given.  The question, though, is what are you going to do about it? I had a high school cross-country coach who used to say “when the going gets tough, the tough get going.” We’d snicker, of course, and make fun this cliched saying.
But now I’m not running cross-country and, guess what, I need to get going.  Something that’s got me going lately is watching a great speech by Jim Valvano at the 1993 ESPY awards in which he inaugurated the Jimmy V Foundation to fight cancer.
If you have 10, 11 minutes, I recommend watching it.  If you don’t have ten to eleven minutes, just start watching it and see if you don’t make time for it.
http://www.youtube.com/watch?v=HuoVM9nm42E
Posted by John's Brain at 2:21 PM No comments:

Pick your own caption 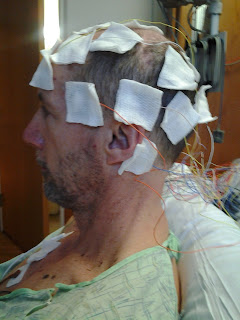 a. “Who’s the mope with all the post-it notes on his head?
b. “Your nurse gets a D- in bandaging 101”
c. “Is this some sort of new hair transplant treatment?
d. “Looks like an EEG to me. My guess is that somebody didn’t keep taking his Keppra.”
If you answered “d” give yourself a gold star. Not only did I have an incident earlier this week, I had to admit that I wasn’t taking my Keppra every day, twice a day.  I disappointed my family, my neurosurgeon and myself.
Admitting that hurt worse than showing this stupid picture.
Posted by John's Brain at 12:19 PM 2 comments:

Giffords Resigns from Office…But Not from Life

I’ve just watched the Gabrielle Giffords video posted on her website - http://www.gabriellegiffords.com/ - and I have two diametrically opposed thoughts about it.
First, she seems to have come to terms with her handicaps in that she acknowledges the severity of them and limitations she has.  That’s a good thing. After a traumatic brain injury or brain tumor, we are changed and usually for the worse. And if you shouldn’t drive or cook or manage the high-stress and important job you used to have, you need to acknowledge that handicap. Her resignation tells me that she has.
It’s hard.
It’s humiliating.
It’s depressing.
But pretending that you can see as well as you used to, when you can’t, is in some ways a lie.  And, to quote Richard Bach (author of Jonathon Livingston Seagull), “the worse lies are the lies you tell yourself”.
At the same time, she has not resigned herself to being anything less than she can be. Her objective seems clear – she wants to return to work as a congresswoman for the state of Arizona. And to do that, she needs to spend 100% of her time in rehab. Will she be able to recover to the point that she’ll be able to run for office?  Who knows? Having read her book - Gabby: A Story of Courage and Hope - I wouldn’t bet against her.  (Here’s link to her book: http://www.amazon.com/Gabby-Story-Courage-Gabrielle-Giffords/dp/1451661061/ref=sr_1_1?s=books&ie=UTF8&qid=1327341870&sr=1-1)
For those of us who’ve had brain tumors or traumatic brain injuries, she’s the role model. She’s the one we can all know and say to ourselves “If she can come back from a bullet to the head, I can come back from my brain tumor.” “Come back” may mean different thanks to different people, but to me it means never giving up and, like the army ad, “being all I can be”.
And just as importantly, it means never letting the tumor consume your life, your personality, or your attitude.
Almost every time I go to the gym I see a guy from church who’s in an endless cycle of rehab. Every time I ask him how’s he’s doing, he gives me a laundry list of his latest illness woes…and then walks away. His illness consumes him and imprisons him. What is so refreshing and motivating and inspiring about Gabby – or at the piece of Gabby that we can see – is that she hasn’t fallen into that trap.
I hope I never do too.
Posted by John's Brain at 12:17 PM 1 comment:

He nailed it…his head. No, really, his own head.

According to an article in today’s Chicago Tribune, on Tuesday Dante Autullo, who lives in the Chicago area, shot a nail into his own head with a nail gun.
And that’s not the weird part.
The weird part is that he didn’t go to the hospital until 36 hours later because it really didn’t hurt that bad. Which is really weird when you look at the X-ray (see picture). 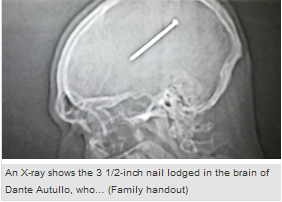 According to the article, “The point of the nail entered cleanly without sending fragments of bone into the delicate tissue of the brain. The flat head of the nail kept it from penetrating too deeply and held it in place securely, just as if it had been driven into a two-by-four, Schaffer said. During a two-hour operation, he drilled two holes on opposite sides of the nail head and lifted out a small piece of bone with the nail stuck in it.
The portion of the brain the nail struck, on the upper right side in the back of Autullo's head, controls some motor functions, but because he has so far showed no side effects, he probably won't,” said the operating doctor from Advocate Christ Medical Center.
I’m not sure what to make of this. I read horrific stories in blogs about victims of brain tumors and traumatic brain injuries who did nothing foolish or silly and yet wound up with a debilitating disease or handicap.  And then this mope shoots a 3 ½ inch nail into his own head and nothing happens to him.
To quote Steve McCroskey, it “Looks like I picked the wrong week to quit drinking.”
Here's a link to the article: http://articles.chicagotribune.com/2012-01-20/news/ct-met-nail-in-the-head-0121-20120121_1_nail-gun-brain-tissue-schaffer
Posted by John's Brain at 3:50 PM No comments:

You are What You Eat or, maybe better said, You are as Brainy as Your Eat

The message is getting clearer – your diet significantly impacts your ability to think.  And if you have thinking challenge in the first place, why make “thinking” any harder for your self.
According to a recent article from the Atlantic, “A new study goes deeper in understanding the connection between good nutrition and a healthy brain.” Importantly, in this study researchers used “…biomarkers in the blood to measure the vitamin levels in 104 participants. They also had participants take tests to measure thinking and memory function, and 42 participants had MRI scans to measure their brain volume.”
The result? “The researchers found some striking connections between nutrition and brain health. People who had higher levels of B family vitamins, as well as vitamins C, D, and E had higher scores on cognitive tests than people with lower levels. The same positive relationship was found for omega-3 fatty acids, which have previously been linked to better brain health.
On the flip-side, people with higher levels of trans fats in their blood had poorer performance in thinking and memory tests. Their MRI scans also revealed more brain shrinkage than people who had lower trans fats levels. Trans fats are found in a variety of junk foods, like fried, packaged, and fast foods. “
Here’s a link to the full article in the Atlantic - http://www.theatlantic.com/health/archive/2012/01/the-connection-between-good-nutrition-and-good-cognition/251227/; and here is a link to the abstract in the scientific journal entitled Neurology - http://www.neurology.org/content/early/2011/12/28/WNL.0b013e3182436598.abstract?sid=22557f7c-d732-4ce6-a48f-a4bd08316626
Posted by John's Brain at 4:14 PM 1 comment: