Tri-Spy through my little eye…

I met Joan Gatz of The Brain Store at The Brain Store near my house this week and I went through their in-house assessment.
It was kinda fun.
I told her that I need to work on my visual scanning (due to my blind spot) and on my spatial relations.
She then asked me a series of pretty non-threatening questions about my strengths and weaknesses and hardly laughed at my answers.
She then gave me some product recommendations that would not only address my weaknesses (e.g. ColorCode, Tri-Spy, Quarto), but also give me a few stretch goals for my strengths, like Pathwords. Since I don’t have an occupational therapist giving me direction any more, it’s nice to have some impartial advice.
I ended up buying Tri-Spy online which looks like it could be fun.
Another thing I like about The Brain Store website is that the product descriptions tell you what area of the brain the puzzle with address.  For example, Pathwords will help activate/work out the Broca's and Wernicke's areas of the brain.
I also forgot about all the brain books that they carry.  The next time I’m there I’m going to buy Laughter: A Scientific Investigation by Robert R. Provine, mostly because the cover photograph is just a hoot. 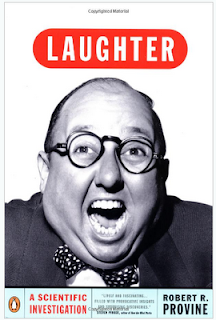 My biggest issue now is going to be finding somebody to play Tri-Spy with me.
Posted by John's Brain at 7:00 AM No comments: 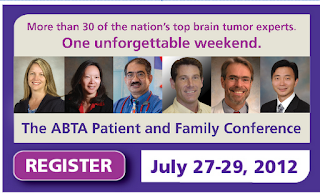 If you haven’t seen it, the American Brain Tumor Associations annual “Patient & Family” conference program is posted at http://hope.abta.org/site/DocServer/2012_patient-family_conference_program_final_4.5.2012.pdf?docID=8521
I’ve read the conference agenda and it looks pretty comprehensive with everything from “Ask the Expert Panel: Quality of Life Issues in Brain Tumor Treatment & Care” to “Meningiomas , Pituitary and other benign tumors: Update in treatment, care and “watch and wait” to “Inoperable brain tumors: Update in treatment & care”.
Since my sister is a Doctor of Oriental Medicine, I’m going to be attending the “Do complementary therapies work? Herbs, acupuncture, and others” breakout session and probably some of the “Healthy eating when you have a brain tumor” sessions.
FULL DISCLOSURE WARNING: Yes, against all odds I will be presenting as part of the survivors panel at 10 am on Sunday morning, July 29th.
BTW, the “registration” button you see above doesn’t work – I hope you aren’t honked off at me.  You can register here: https://secure2.convio.net/abta/site/TRR/ABTAEvent/ConnectionsMeetingandRetreat/951518800?pg=ptype&fr_id=2380
Posted by John's Brain at 11:03 AM 1 comment: 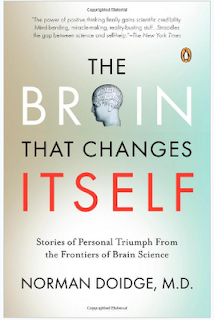 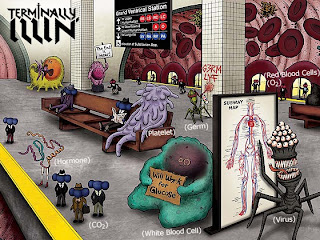 If you haven’t heard of their project, they describe it on their website - http://www.kickstarter.com/projects/kaylinmarie/terminally-illin-the-comic-book - as “...a candid look into the life of a young adult battling cancer, but with a psychedelic, sci-fi twist! It’s more than a comic book: It’s provocative, educational, entertaining, and totally original.  Think of Terminally Illin’ as a chemo-induced "Alice in Wonderland' meets campy 'Hollywood' action-adventure.”

On the site they remind us that “Each year over 72,000 young adults are diagnosed with cancer in the US-- that's one new diagnosis every eight minutes. There's an obvious lack of literature (and humor!) catering to cancer patients-- especially young adults. Terminally Illin’ is filling this specific niche in the cancer community…”

What I’ve read so far is pretty awesome, so I can’t wait to see the rest.
Posted by John's Brain at 7:00 AM No comments:

That’s the feeling I had at the end of my last over-the-road car test.
Much like Joe Pesci’s character in My Cousin Vinnie, who flunked the state bar exam for lawyers six times, I flunked my first two over-the-road driver’s tests after my brain tumor operations.
So I was a bit nervous about my latest test, especially since I just got off of a month or so of steroids which always knocks my sleeping pattern sideways.
I had been tenaciously working my Block Builder puzzle and Lumosity games to work on my spatial relations and working memory abilities…and I think they helped.
The driving instructor, and my newest occupational therapist, rode along with me. As I drove, I felt like I was on my bike – in command of what I was doing and what was going on around me. I wasn’t perfect, but I felt like I was safer than most of the drivers I see on the road.
When we got back, they asked me to wait in the waiting room until they caucused and got to a joint decision.
The last time I knew I didn’t drive well. Since I had been up for over 24 hours with a dying dog, my dumbest decision was to actually take the test.  This time, though, I knew I did just fine.
When they called me in, told me I passed (with some restrictions) and then started to give me nothing but negative feedback.
If they didn’t want to “pass” me, why did they give me a (provisional) green light to drive again? (Actually the “pass” was just a recommendation forwarded to my neurosurgeon.)
Instead of walking away happy and feeling good about myself, I felt like they didn’t really want to pass me, but had no good reason not to pass me.
I don’t think focusing on the negative helps make anybody better.  It reminds me of the baseball coach who kept saying to his shortstop “don’t swing at his curveball, don’t swing at his curveball, don’t swing at his curveball”.  Guess what?  He swung and missed the curveball.
This stupid brain tumor journey is hard enough without people being so negative.
The really good therapists, and I’ve had several, are the ones that find ways to give you positive reinforcement, to say “you did good”.  A few words from those folks are the words that really make me motivated and help me move forward.
Posted by John's Brain at 7:00 AM No comments:

Why do You Turn Down the Radio When You’re Lost?

I not only do this when I’m lost, but I also do it when I’m looking for something that I’ve misplaced.
At many levels this makes no sense, I can’t “hear” the car keys or book I’m reading or cellphone I put down somewhere.
Caroline Latham, in an insightful article on the SharpBrains website explains this by quoting Steven Yantis, a professor in the Department of Psychological and Brain Sciences at Johns Hopkins University, who said: “Directing attention to listening effectively ‘turns down the volume’ on input to the visual parts of the brain. The evidence we have right now strongly suggests that attention is strictly limited - a zero-sum game. When attention is deployed to one modality - say, in this case, talking on a cell phone - it necessarily extracts a cost on another modality - in this case, the visual task of driving.”
It’s a helpful article with some hints on what to do about it (other than do a better job of putting your keys in the same place every time). Here’s a link to it:  http://www.sharpbrains.com/blog/2006/11/11/why-do-you-turn-down-the-radio-when-youre-lost/
Posted by John's Brain at 3:40 PM No comments: