A Meningioma Webinar Invitation from the ABTA and Dr. Johnson


An invitation from the ABTA to this Thursday, August 22nd webinar popped into my in-box this morning and I thought you should know about it.
I’ve been to a number of ABTA presentations like this and found the following to be true:

If for some strange reason you’re reading this blog and don’t know what a meningioma brain tumor is, here’s a short description from the webinar posting: ”Meningiomas account for about 34% of all primary brain tumors. They are most likely to be diagnosed in adults older than 60 years of age, and the incidence appears to increase with age. Meningiomas are rarely found in children, and occur about twice as often in women than men. This webinar will provide an update in the ‘watch and wait’* approach, treatment and care of people navigating a Meningioma tumor. The latest information regarding the genetics of meningiomas and how this may affect treatment will also be discussed.”


The presenter will be Mark D. Johnson, MD, Harvard Medical School; Brigham & Women's Hospital. Dr. Johnson specializes in the neurosurgical management of brain tumors & directs an NIH-funded research laboratory focused on the genomics, proteomics and cell biology of meningiomas and gliomas. (See, I told you he would be a brainiac).  You can register @ https://www3.gotomeeting.com/register/689032614

*No, “Watch and wait” is not a euphemism for “do nothing.”
**If you think the idea of “Watch and Wait” doesn’t drive people nuts, just read the following series of postings on Inspire.com: http://www.inspire.com/groups/american-brain-tumor-association/discussion/is-wait-and-see-if-it-grows-normal-path-for-tumors/

Book Review: “The Truth in Small Doses” by Clifton Leaf* As I read this section it seemed to me that we’re getting the least bang for the buck that we’re investing in this war. It feels like we have a system that dilutes the “war on cancer” into numerous skirmishes that are not helping win the war or even a strategically important battle or two. The reason, in his opinion, is a “dysfunctional cancer culture.”

Leaf writes that he was driven to write this book because “If the efforts to win the fight against cancer were paralyzed by a dysfunctional cancer culture, how did we get here? Those five words – ‘How did we get here’ – became the focus of my life for the next nine years. They are, indeed, the core of this book.” In reading that I clearly got the sense that he not only has “skin in the game,” most of his body and waking thoughts are in the game, too.

The book has four sections:

Part I describes the enormity of the cancer burden – a burden that is rarely understood and horrifying when it is.
Part II “shows why the scientific strategy we have chosen cannot succeed in lessening the terrifying human cost of cancer.”
Part III examines the “dysfunctional cancer culture” in copious detail. Commonly found words in this section are “fiefdoms” and “lack of collaboration/synergy.”
Part IV provides some “tough love” medicine for healing this broken and dysfunctional system.

As an guest editor for the New York Times Op-Ed pages and a previous executive editor at both the Wall Street Journal’s SmartMoney magazine and Fortune magazine, Leaf is a good writer. He takes complex science and process issues and writes these issues about them in the simplest way possible.

Sometimes, though, “the simplest way possible” made me wish I’d remembered everything I should have learned in high school biology.

To counteract the density of the science, Leaf often illustrates his point with a very human tale about how some doctor or scientist made a significant impact in the war against cancer. I particularly liked the story about the Irish, one-eyed surgeon Denis Burkett and his 10,000 journey to “help solve the mystery of the African lymphoma.”

Who should read this book?

Should cancer victims, caretakers and friends/family read this book? Maybe. This isn’t Gone Girl or The Inferno or And the Mountains Echoed. Leaf packs tons of important context into his stories and science into his explanations. As a result I had to reread several sections and probably still don’t understand the bits regarding anything happening at the cellular level.

I do hope that Mr. Leaf comes to the Chicagoland area because I’d love to listen to him talk about his book and the “dysfunctional cancer culture.”

*Yes, this is “Part II” of my review of his book. I received the book for free but didn't receive any inducement to write a favorable review. If folks want me to review their books in the future, though, please keep in mind that I really like a nice scoop of hazelnut gelato.

We’re losing the war with cancer (Book Review – Part I) 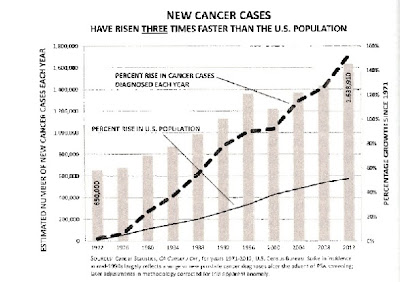 The graph and title say it all “New Cancer cases have risen three times faster than the U.S. population.”

Often the books I read and review are quite different.  They usually have something to do with brain issues and, inevitably, they’re sad, informative, instructive, frightful, memoir-ish, educational, mordant and/or sardonic.

The Truth in Small Doses has a dose of all of that. More importantly, though, the book puts a lie to the myth that we’re winning the war against cancer.

Leaf dives deeply into “Why”, “How did we get here?” and “How to fix the fight against cancer that is paralyzed by a dysfunctional cancer culture.”

Consumed with our inability to make progress in conquering cancer, he's spent years of his life researching this issue with a journalist’s investigative eye. In that quest he’s “…served as a (research) grant reviewer, and on various advisory boards and committees, not as a reporter, but rather as a participant, panelist, or member.” Impressively, his references, citations, notes, and the like start on page 311 and winds up on page 480*. Net, He’s done his homework…and then some.

As I read it, I’m on page 206, I also need to tell you that it’s a dense book. While there are a number of absorbing and well-told personal stories, there’s also a lot of science. At times I want to retake high school biology and chemistry so I can understand what he’s writing. Given the complexity of the complexity of the issues involved, it’s not surprising that it’ dense. In many ways the depth and complexity is reassuring.

In case you can't read the sources for the eye-opening graph at the top of this article, the following are listed: Cancer Statistics, A Cancer/J Clin, for years 1971 - 2012; U.S. Census Bureau. Spike in incidence in Mid-199s largely reflects a surge in new prostate cancer diagnoses after the advent of PSA screening later adjustments in methodology corrected for this apparent anomaly.

Lastly, you should know that it is my intention is to write a “Part II” review after I finish reading pages 206 through 310.

*This assumes that you’re reading the hard cover edition and aren’t reading it on your Kindle in bed while your significant other sleeps.

Email ThisBlogThis!Share to TwitterShare to FacebookShare to Pinterest
Labels: Cancer book review, Clifton Leaf, The Truth in Small Does

All About Brains.com – a “youtube.com” of brain info

That’s kind of an all-encompassing, yet focused website name, and it’s the headline and subhead of http://www.allaboutbrain.com/

If you go to the site right now, the first thing you see is a clip of PBS’ Gwen Ifill, Senior Correspondent  interviewing Dr. Murali Doraiswamy of Duke University School of Medicine about decreasing rates of dementia. That’s first class content.

If you then scroll down a bit, you’ll see another video, this one’s “What are the Symptoms of Brain Tumors?”  Or, if you're a nerd, zip over to a link to a segment entitled, “The Brain with Bill Nye the Science Guy” - http://www.allaboutbrain.com/the-brain-with-bill-nye-the-science-guy

According to the “About Us” tab on the website “We have decided to use All About Brain as a vehicle to provide available video information to those needing to learn about the functioning of the brain and how they may discover to correct or live/deal with certain problems that may occur now or in the future.

You will find many studies in the form of video’s and tutorials concerning the lungs and functioning of the brain. Follow them closely and understand that we do not provide medical advice whatsoever, as that is left to your personal health care physician.”

Ooh, and they have a really good “Resources Online Links” page - http://www.allaboutbrain.com/resources-online-links/  (even though it doesn’t include my blog).
Posted by John's Brain at 1:17 PM 1 comment: