Got Gliomas? Don’t Eat (for a bit)


According to an article posted on http://www.oncologynurseadvisor.com,   Valter D. Longo, director of the Longevity Institute at the University of Southern California, Davis, School of Gerontology, and his colleagues have published results of a new study which shows that a controlled fasting period lasting no more than 48 hours improved the effectiveness of chemotherapy and radiation therapy in mice with gliomas. (If you don’t know what gliomas is, be happy that you don’t.)

In previous research, Longo's team showed that short-term fasting made cancer cells vulnerable to the toxic effects of chemotherapy while protecting healthy cells. In the new study, the investigators tested the effect of starvation on glioma cells by depriving mice of food for 48 hours prior to radiotherapy or prior to chemotherapy with temozolomide, the standard therapeutic agent used after attempted surgical resection of glioma.

Compared with mice that underwent fasting alone or radiation alone, more than twice as many mice receiving both interventions survived to the end of the trial period. 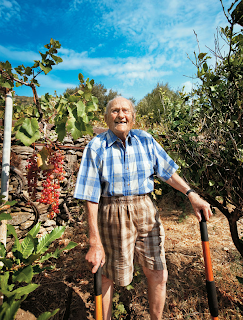 Cancer on the Brain: Book Review 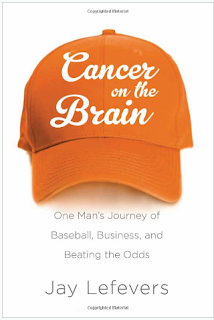 I just finished reading Cancer on the Brain: One Man’s Journey of Baseball, Business and Beating the Odds.

For starters, let me say that this isn’t a book about brain cancer. It’s a book about a man who first had a benign brain tumor, hemagiopericytoma, (no, I never heard of it before) and then had cancer, non-Hodgkin’s lymphoma, which was a mass in his chest.

The book is also about an unrepentant, type-A “man’s man.” This is not a guy who wallows in self-pity. This is a guy who, seven days after a six hour surgery, went back to work. Seven days after my surgery I couldn't even spell "work."

And, to be clear, this is also a guy who’s had more than his fair share of radiation and chemo.

For me, the most interesting part of the book had nothing to do with brain tumors or cancer, it was his chapters about coaching a team of mostly Hispanic boys and the life lessons he taught them…although he seemed to learn a lot from them, too.

In many ways he reminds me of my uncle who had a big heart, but just didn't want anybody to know it.

If you’re interested in the science behind the diseases or detailed insights into his emotional responses, this isn’t the book for you. If you want to know about a hard-charging, successful businessman who sees a brain tumor, cancer and the associated handicaps (e.g. a numb and malfunctioning leg) as annoying rather than debilitating, try it.


According to the St. Louis Post Dispatch, Cardinals analyst and talk-show host Chris Duncan was back on the air, albeit briefly, Monday, and said "a tumor in my head'' is what had kept him off the WXOS airwaves for three weeks. "I had it removed and I'm doing well now,'' he said in a brief appearance on 101.1 FM's afternoon drive-time show, a program for which he normally is a co-host.
Duncan went to Duke University's medical facility to have the operation performed.
"I feel really lucky I got a chance to go down there and have the surgery and get the tumor removed,'' he said. "I feel great right now. Hopefully I can come back as soon as possible and rejoin you guys.''
He works with Randy Karraker and D'Marco Farr, and the program is the highest-rated local sports-talk show in the St. Louis market. And Duncan, a former outfielder who won a World Series ring with the Cardinals in 2006, is on the comeback path.
Here’s a link to the article: http://www.stltoday.com/sports/baseball/professional/ceeb3f89-5b47-590d-8519-3afc1f654fd4.html

My favorite book blending pro baseball and a brain tumor is, of course, Liz Holzemer’s  memoir entitled Curveball: When Life Throws You a Brain Tumor - http://www.amazon.com/Curveball-When-Throws-Brain-Tumor/dp/0978945670
Posted by John's Brain at 9:42 AM 1 comment:

I recently got an email telling me about the Brain Science Foundation. So I Googled the organization (doesn't everybody start this way?) and read the following mission statement:

“The Brain Science Foundation is a nonprofit organization founded by Steven and Kathleen Haley in 2002 based on a realization that little is known in the medical world about meningioma and other primary brain tumors and a desire to fast-forward research on them.”

I liked their focus on meningioma and the phrase “fast-forward,” especially since I often feel like we’re stuck in “slo-mo” on meningioma research advances.

If this all reads and sounds like a non-profit run by a tech firm, here’s why: founder Steven Haley is a hugely successful serial tech firm entrepreneur. He, and his wife Kathleen Haley, established the Brain Science Foundation in 2002 following Steven’s treatment for meningioma in 1997.

Interested? Watch their nifty video - http://www.brainsciencefoundation.org/Default.aspx - which does a nice job of explaining who they are, what they do and how they’re going about their research.