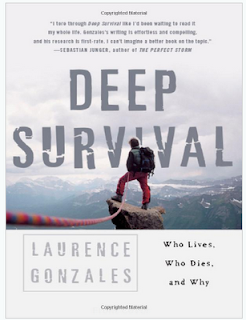 “In Deep Survival, Laurence Gonzales pulls readers to the boundary region between life and death, where they peer into the hearts, minds and souls of those who have survived seemingly impossible situations and those who have given in to death. Through careful dissection of case studies, he illuminates the essence of the true survivor – the internal battles that are waged between fear and hope, reason and emotion, despair and correct action.”

And while Gonzales’ book is about folks who have been lost in jungles, at sea and on mountain tops, the essence of his findings is relevant, I believe, for brain tumor victims as I often felt lost during my illnesses and operations. At the end of his book, he distills his findings into 12 key points. Some of the points are only for victims stranded at sea, and others are surprisingly relevant to cancer and brain tumor victims.

I heard Gonzales speak at an event hosted by a local book store and was found him to be articulate, insightful and wonderfully grounded...much like his book.

I’m waiting for his latest book, Surviving Survival: The Art and Science of Resilience, to be acquired by my local library so I can read that book, too.