I want to be a “superager”!

According to an article by Mitch Smith in last Friday’s Chicago Tribune, Northwestern University has conducted an interesting research study among “superagers.” The article states that Superagers are “…someone who continues to function at a high cognitive level even as most people her age see their memories recede.” 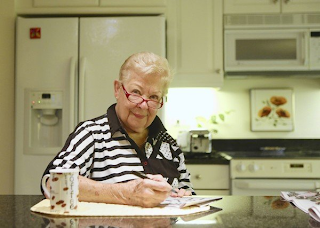 The article includes a short profile of Barb Shaeffer, 85, (see photo above) of Chicago, who “…does two crossword puzzles every morning. She often completes an entire book on her Kindle in a day and is preparing for her three fall classes, one of which she co-teaches, through a Northwestern University program for retirees. (Heather Charles, Chicago Tribune)
Smith notes that “Northwestern University researchers examined 12 such superagers from the Chicago area, ages 80 to 90, and found that the cortex of their brains — a region important for cognition — looked more like a middle-aged person's than an average octogenarian's.”
The article quotes Emily Rogalski, a Northwestern professor on the research team, who said that "A lot of studies are figuring out what's going wrong with the brain. We hope by identifying what's going right with the brain that we can … develop strategies for avoiding disease and disability."
I like to think that my mother, who does the crossword puzzle every day, and my father, who is hooked on “Great Lecture” CDs, would both be good candidates for their study.
Here’s a link to the Tribune article: http://www.chicagotribune.com/health/ct-met-super-agers-20120817,0,2826004.story
And here’s a link to the research study abstract from the Journal of the International Neuropsychological Society: http://journals.cambridge.org/action/displayAbstract?aid=8656556
Posted by John's Brain at 7:00 AM