“Doctors Object to High Cancer-Drug Prices” … And I Do Too! 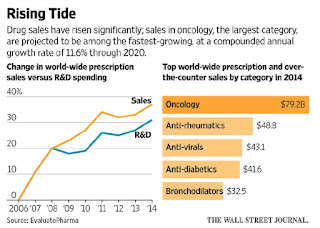 If cancer doesn’t kill you, the cost of your oncology medicine might give you a heart attack.

That’s my takeaway from this article in the Wall Street Journal about the high cost of cancer-fighting drugs, the absurdly high cost of those drugs and profits pharmaceutical companies are making off of cancer victims and their families: http://www.wsj.com/articles/doctors-object-to-high-cancer-drug-prices-1437624060?mod=e2fb

According to a well-researched article by Jeanne Whalen, “More than 100 oncologists from top cancer hospitals around the U.S. have issued a harsh rebuke over soaring cancer-drug prices and called for new regulations to control them.

The physicians are the latest in a growing roster of objectors to drug prices. Critics from doctors to insurers to state Medicaid officials have voiced alarm about prescription drug prices, which rose more than 12% last year in the U.S., the biggest annual increase in a decade, according to the nation’s largest pharmacy-benefit manager.”

According to Whalen, “In an editorial published in the Mayo Clinic’s medical journal, the doctors focus attention on the financial burden to patients, saying the out-of-pocket costs are bankrupting many just as they’re fighting a deadly illness.

Patients ‘have to make difficult choices between spending their incomes [and liquidating assets] on potentially lifesaving therapies or forgoing treatment to provide for family necessities,’ the doctors write in Mayo Clinic Proceedings, a monthly peer-reviewed journal.
As a result, about 10% to 20% of cancer patients don’t take their treatment as prescribed, the doctors say.”

Hmmm, let me think for a minute. I could take my cancer medicine which might save my life and bankrupt my family, or I could just forgo my medicine and die quicker and a bit more painfully - now that’s a choice which gives new meaning to the saying ”between the devil and the deep blue sea” (and in this case we know who the devil is).

To my way of thinking, this is another powerful argument for mandatory ethics classes in business school … not just offering them, but making them mandatory (and, perhaps requiring the final exam is administered with a lie detector machine attached).

If you are one of my non-U.S. readers, I’m sure this sounds more than strange, and you’re right.  Feel lucky that you don’t have our convoluted health-care system.

Here’s the quote that, to my way of thinking, nails the issue: “What we’re fighting is the greed. The greed and the additional maneuvering that is being exercised after you’ve already recouped what you’ve invested. There is no control, no regulation,” Ayalew Tefferi, a hematologist at Mayo Clinic and the first signator on the new editorial, said in an interview.

eToro is the most recommended forex broker for novice and advanced traders.