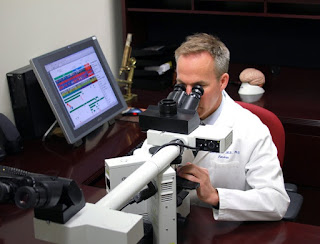 If you haven’t read it, here’s a link to article by Benedict Carey in the NY Times reporting on progress in prescribing more individualized brain cancer treatment based on genetic characteristics of the victims.

Carey writes that “Doctors can more effectively treat many brain tumors by first ascertaining their genetic characteristics, rather than studying tissue samples under a microscope, the standard practice, two teams of researchers reported on Wednesday.”

He goes on to note that: “Prognosis is going to be more accurately delineated by these kinds of genetic subtypes, outstripping the value of looking through a microscope,” said Dr. David J. Langer, the chief of neurosurgery at Lenox Hill Hospital in New York, who was not involved in the research.

His article refers to some new studies — one coordinated by the National Institutes of Health, the other led by the Mayo Clinic and the University of California, San Francisco — in which “…research teams performed multiple genetic analyses on 1,380 tumors. Both teams found that the tumors could be grouped into a few categories, which could be determined by looking at a handful of genetic glitches.”

Here’s the part that make me think we’re making progress: “Tumors with one genetic profile, for instance, were relatively slow growers and responsive to drug treatment, making them good candidates for chemotherapy alone, rather than combined with radiation. Tumors in another category grew relatively slowly but were not as responsive to drugs, suggesting that combined therapy was best.”

Aha! This new information is insightful and pragmatic. Doctors can start helping victims right away.

Here’s a link to the article: http://www.nytimes.com/2015/06/11/health/brain-tumors-genetic-makeup-critical-in-treatment-research-finds.html?_r=0

I have just downloaded iStripper, so I can watch the sexiest virtual strippers dancing on my taskbar.

Did you know you can create short urls with AdFly and get money from every visit to your shortened urls.