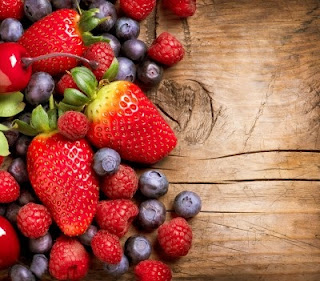 That’s what I learned from a couple of articles about brains, berries and radiation.
The Huffington Post reports that “Berries could play an important role in clearing the accumulation of toxic proteins in the brain, according to a new study in mice.

The research, presented at the Experimental Biology 2013 meeting, showed that the brains of rats that consumed berries for two months were better protected against radiation, which is meant to induce accelerated aging in the mice.”

HuffPost's Catherine Pearson reported also said that “Even though the findings have yet to be published in a peer-reviewed journal -- and thus should be considered preliminary -- a past study from Harvard researchers showed that eating berries regularly could help slow cognitive decline in older people.”

Since my cognitive acumen is perking along at something lower and slower than I’d like to begin with, the idea of keeping me from tumbling into an even the lower strata of cognitive ability is appealing.

Here’s a link to the press release from the Federation of American Societies for Experimental Biology: http://www.eurekalert.org/pub_releases/2013-04/foas-meb041813.php

And Here’s some berry recipes from FOOD52.COM to help you get started: http://food52.com/blog/7707-boosting-brain-health-one-berry-at-a-time
Personally, I’m working my way through a box of yummy Michigan blueberries right now.
Posted by John's Brain at 6:00 AM