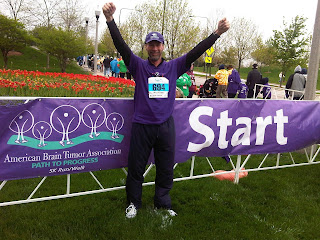 I love this event.

In the hope that it’ll convince you to sign up and run, here’s an excerpt from Chief Complaint, Brain Tumor about my first ABTA fun run:

“I was running to get in shape for the American Brain Tumor Association’s five kilometer fun run. I read that the funds were being raised for brain tumor research, so I decided to sign up and give something back to the brain tumor community.

The morning of the fun run, the weather was downright unfriendly: gusty and cold. Nonetheless, my wife and I got our butts out of bed and zipped down town at an unusually early hour for a weekend morning.

The fun run began right next to the Soldier Field football stadium alongside the lake. The whole area felt like an extension of the museum campus which included the Adler Planetarium, the Field Museum and the Shedd Aquarium. Instead of feeling like the epicenter of the city, the venue felt more like a big park.

It was a great place for a fun run.

I ’m not sure what I was expecting for a turnout. If you’d asked me, I might have guessed upwards of a couple of hundred runners and, given the cool temperature and stiff breeze, a few friends and family members.

Thousands of people were there: friends, families, kids in strollers, kids who should have been in strollers, runners, walkers, folks who needed walkers, survivors, victims, victims in wheel chairs and at least one victim wearing a dorky blue helmet (no, that wasn’t me, I ran without my helmet… and please don’t tell the lady from the infectious disease department).

Everybody seemed to be wearing a motivational shirt of some sort. A lot of people were wearing the official dark purple Pathway to Progress t-shirt, but many were wearing brightly-colored, custom-designed team t-shirts. They had names like “Madeline’s Milers,” “Legs for Lin,” “Go for Joe,” and my favorite team name, “Tommie’s Tumors.”

I had found my “peeps.” I had found a community of folks who, like me, were battling a nasty, unfair and relentless enemy. Unlike me, they were doing so with faith, strength and a touch of panache. I walked around the staging area with a goofy smile on my face. Of course, I also felt that way at Michigan State University football games when everybody wears a Spartan t-shirt, so I guess I’m easily swayed by a crowd.

When the gun went off to start the race, I couldn’t wait to run. There was something fundamentally inspirational about running with this group. So I ran, enjoyed the lake view, shouted encouragement to other runners and had a blast. And in spite of the high-tech timing device that I wore on my wrist, I had no idea what my time was and I didn’t care.

After the race my wife and I hung around oblivious to the cold and windy weather. We looked at the lake, grabbed a cup of nearly hot coffee and enjoyed being part of the crowd.

As we strolled, we talked about how next year we’d recruit our own team, get our own t-shirt design, get our own team name, and have a group of walkers and runners. Even though we didn’t say it, I knew then we would really, truly be part of the community.”

See www.chief-complaint.com for another excerpt.

Congratulations on your first 'ABTA Fun Run/Walk" It is a wonderful way to support the movement, meet new people on the same path and raise awareness for early diagnosis.

The only walk run close to Connecticut is New York. I hope one is started in Connecticut soon.